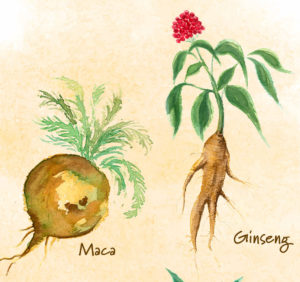 Foods To Help You Focus

Food is the fuel that regulates your energy and mood, both of which can significantly affect your focus and mental clarity. Below are a few superfoods and trends that will help you improve your focus.

At this time of increased anxiousness, stress and worry, we can look at herbs, fruits, roots that help our bodies and minds cope and maintain some semblance of equilibrium. Adaptogens are non-toxic compounds that help the body adapt to stress and restore normal physiological functioning. Although a relatively new term, many adaptogens have been used for centuries in traditional medicine, the most obvious examples being Traditional Chinese or Indian Ayurvedic. Popular examples of adaptogens are panax ginseng, ashwagandha, bacopa monnieri, rhodiola, curcumin, and some such as cacao and maca that can function in an adaptogenic way.

So how do adaptogens work?

When we face a stressor, whether physical or mental, our bodies go through what’s called general adaptation syndrome (GAS). GAS is a three-stage response: alarm, resistance, and exhaustion. Adaptogens help us stay in the resistance phase longer, via a stimulating effect that holds off the exhaustion. Instead of crashing amid a stressful moment, task, or event, we attain equilibrium and maintain focus. Adaptogens have the potential to help indirectly with other health issues, like pain, digestive concerns, insomnia, and more. Stress sets off a cascade of physical responses that affect immune function, our hormones, our cognitive function system… If these stressors persist, this leads to chronic illness.

We have combined well-known adaptogens like ashwagandha, yerba matte and maca (see below) with pea and rice protein in our Super Protein, for true holistic body health benefits.

According to research in 2006, maca root works directly upon two regions of the brain (the hypothalamus and the pituitary gland) to help boost focus while a later study confirmed it may boost physical and mental energy, reduce stress, alleviate depression, and calm anxiety while also stimulating brain activity. There is some evidence to suggest that maca can improve learning and memory (a 2011 study found that maca could improve memory in mice) while comprehensive reviews since then suggested that maca may have benefits for learning and memory performance with researcher suggesting that it could be helpful in treating conditions that affect these processes, such as Alzheimer’s disease.

Maca can be found in combination with another amazing antioxidant (see below) in our Cacao Boost blend, or in our Organic Maca Capsules.

Studies show that blueberries boost concentration and memory for up to five hours because the antioxidants in blueberries stimulate the flow of blood and oxygen to your brain. Blueberries also contain a cocktail of antioxidants including anthocyanins, proanthocyanins, resveratrol and tannins shown to boost focus, and even protect against cancer, heart disease, and dementia. Darker fruits and vegetables tend to be higher in these compounds so look for strawberries, cranberries, acai, goji and pomegranate, or consider using our Superberries blend that has the added bonus of supporting the immune system.

In 2007, Salk Institute researchers found that the flavonoid epicatechin, found in blueberries, cocoa, grapes and tea, improved memory ability in mice. Epicatechin seemed to promote blood vessel growth in the brain. Epicatechin goes beyond antioxidant benefits, as research also showed it may protect brain cells through mechanisms unrelated to its antioxidant ability. The researchers reported that somehow epicatechin protects brain cells from the negative effects of beta-amyloid plaques, although the exact mechanism of how this works is still not entirely know.

Green tea can be found in our Supergreens blend, which contain a host of other superfoods to aid full body revitalisation.

Cacao contains the highest concentration of antioxidants of any food in the world. These antioxidants, like green tea, include polyphenols, catechins, and epicatechins. Many components of cacao including alkaloids, proteins, beta-carotene, leucine, linoleic, lipase, lysine, and theobromine, all work together to improve physical and mental health.  For example, theobromine helps to stimulate the central nervous system, relax smooth muscles, and dilate blood vessels, giving the body a boost of energy; ‘bliss’ chemicals found in cacao  help to increase circulation and availability of serotonin and other neurotransmitters in the brain, improving mood and combating depression.

Cacao can be found on its own in our Organic Cacao, or in combination with Maca, Lucuma and Hemp in our Cacao Boost blend which supports energy and focus.

Breakfast is the first meal of the day providing you with energy & filling you up until lunchtime. We have listed our favourite breakfast recipes to keep you…

Read More
We use cookies to provide you with the best experience on our site. If you continue shopping with us we'll assume that you're happy to receive cookies. OKCookie Policy