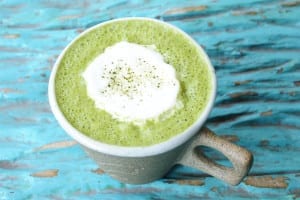 It’s starting to get a bit nippier now, so it’s time to face the fact that summer has come to an end, the leaves are turning brown and the wintery chill is gradually settling in. So it’s time to ditch the iced coffees, the smoothies, the slushies, and instead whack out our wintery warmers; and first up for me, thanks to my lovely superfoody fairy godparents at Bioglan Superfoods, it’s my Raw Cacao Matcha Hot Chocolate.

-Dairy/Non-Dairy Milk/Mylk according to preference

It’s simple as making a normal hot chocolate or coffee – Boil your kettle, add hot water to your powder mixture in your mug, stir it up with a squeeze of your sweetener and one all dissolved, add your cold milk/mylk.

So other than tasting utterly divine, why am I opting for this in the morning instead of my usual winter warmer – a chai tea latte from Starbucks? (Been my regular since I started high school – well, back then it was used to wash down a cinnamon swirl too while I waited for the 297 bus from Ealing Broadway!!)

Well, as I have posted before on my instagram and here on my blog, I am lucky enough and privileged to say that I am powered by two cracking companies – I get my morning Matcha fix from the guys at Neat Nutrition, and I am Superfood-fuelled by Bioglan Superfoods- and it just seemed to be pure alchemy once I brought these two worlds together.

But why this combination? In a nutshell, these two ingredients are incredibly powerful, natural energy boosters, providing sustained energy throughout the morning, and even throughout the day!

Matcha Green Tea has been used by Chinese Daoists and Japanese Zen Buddhist monks as a means to relax and meditate, whilst simultaneously giving them the ability to remaining alert and focussed. This higher state of consciousness is due to the high concrentration of the amino acid, L-Theanine. L-Theanine promotes the production of alpha waves in the brain which induces relaxation without resulting in drowsiness. Another side-effect of L-Theanine is the production of dopamine and serotonin. These two chemicals enhance mood, improve memory, and promote better concentration. So whether you’re up running about, or at a desk, Matcha will help you to focus on the task at hand, and also perform it with more postitivity than one might normally! You may end up becoming a morning person after all!

The Japanese Samurai warriors drank Matcha Green Tea before going into battle, due to its incredible energizing and focussing properties. If Warriors can go into battle on this stuff, we can brave rush hour, right? While all green tea naturally contains caffeine, the energy boost received from Matcha is largely due to its unique combination of other nutrients. The increased endurance from a bowl of Matcha Green Tea can last up to 6 hours and because of the effects of L-Theanine, Matcha drinkers experience none of the usual side-effects of stimulants such as nervousness and hypertension. It’s a better, more sustained, cleaner source of energy. Bin the bullet coffee and with that, the energy peaks and troughs, and opt for matcha to get longer lasting energy.

Drinking Matcha Green Tea has also been shown to increase metabolism and help the body burn fat about four times faster than average, without the risk of nasty side effects like some over-the-counter / internet dietary aids have been known to cause.

Raw Cacao contains the mood improver, anandamide – known as the ‘bliss molecule’, which creates a feeling of euphoria. These “bliss” chemicals help to increase circulation and the availability of serotonin and other neurotransmitters in brain, improving mood and combating depression.Long considered a ‘happy food’, chocolate is a popular treat when we need ‘cheering up’, recent research has discovered that cacao contains chemicals (such as Phenylethylamine* and Serotonine) which are scientifically proven to be present in the brains of people when they are happy, more relaxed, playful and creative. Cacao boosts brain levels of serotonin, the feel good brain chemical

The benefits of cacao are proven to boost the brain levels of calming hormones and restore feelings of well-being.reate loads of energy and combat fatigue with one of the highest concentrations of magnesium found in this natural food source. Magnesium also helps to protect against osteoporosis, reduces type II diabetes, and lowers blood pressure.Raw cacao powder (2tbsp) contains 52mg or 14% of daily value.

Drink chocolate and improve your metabolism… ALRIGHTY THEN!! Well, not your average malteasers hot chocolate I’m afraid, it’s the real deal – the raw cacao. Restore your internal balance and reset your metabolism. Not getting sufficient antioxidants in your diet can wreak havoc on the body and lead to metabolic distress. A Swiss 2009 study found that in just under two weeks, regular consumption of cacao reduced the stress hormone cortisol, improved metabolism, and even improved gut microbial activity. For those of us who are stress heads and have a sugar addiction – you know that spare tyre round your tummy – bingo, it’s down to those two factors. So we need to learn to chill out, and we can get our chocolatey fix from the cacao – the magnesium helps to sate the cravings, and in turn we will gradually reduce our levels of cortisol, and with that the dependency on the sweet stuff.

This is only a mere FEW of the benefits of cacao and Matcha – I have only focussed on the energising and mood enhancing properties, really, as I find those factors most important to my lifestyle, but over the course of this year, working alongside Bioglan Superfoods, I will be delving into research and finding out more properties of these magical superfoods, and will keep relaying this information to you, so you can find your Superpowered You too.

It’s National Vegetarian week this May. Whether you’re a seasoned vegetarian, vegan or flexitarian we have some recipe inspiration for you. We’ve rounded up some of our favourite…

It’s finally spring! At Bioglan Superfoods we’re getting out our picnic hampers and dusting off our picnic blankets ready for some alfresco dining. With the turn of spring…